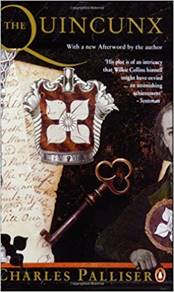 Source - Flyleaf of The Quincunx, by Charles Palliser, Penguin, London, 1990

PALLISER, CHARLES, Born near , Charles Palliser was educated at eleven schools in , and the South West of England. He attended , , where he gained a First in English in 1970. After completing a B.Litt. at , he taught for a year at Huddersfield Polytechnic. Since 1974 he has been teaching nineteenth-and twentieth-century fiction at in . He has also taught creative writing at .

He has published articles on George Eliot, Henry James and William Faulkner in Modern Language Quarterly, American Literature and elsewhere. His stage play, Week Nothing, toured in 1980 and a radio play, The Journal of Simon Owen, was broadcast on Radio 4 in 1982.

Further information: Charles Palliser was the sole subject of a BBC 2 TV programme on Thursday 7 May 1992, called "Obsessions, Writing" wherein Charles Palliser, author of The Quincunx, pondered his craft.

Note by TJS: Charles Palliser is descended from one of the brothers of Sir William Palliser.

His novel, The Quincunx, described in Wikipedia

Review of his novel, The Unburied